Which also means that summer is coming to an end (sniff, sniff). 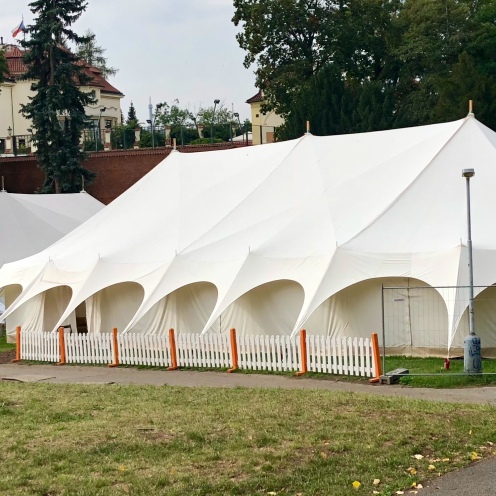 We have always both enjoyed the Cirque du Soleil shows in Las Vegas, San Diego, Prague, and New York, but Letní Letná is unique. Of course, it is also super convenient to go there from our house. There are usually about 4 – 6 big circus tents set up with troops coming from France, Spain, Belgium, Czech and other places. The size of the troops range anywhere from 1 – 20 people and most performers and workers are camping in their circus vans during the few weeks they are here. Language is usually not required or just minimally used – Czech, English, French, it really doesn’t matter for the understanding. In fact, it is usually quite cute when they throw in their newly learned Czech words making the audience happy. This is the first year I’ve seen animals used but they were low key (two horses, two birds, and a dog).

However as the years go by, we find ourselves rating them harsher and more critically. As if we could do their acrobatics! Ha! We might rate the show ABC, which just means ‘another bloody circus’. It is actually very much a part of our rating scale of anything like ‘another bloody castle, church, cemetery, cave, canal, city, etc…”. We like things that aren’t ABC.

We attended four of the circuses this summer which were:

The one that stood out above the others was Cirque Inextremiste. We had seen these performers couple years ago and they once again proved to be amazing. This troop of three focused on balance, and their props were huge boards on which they precariously stacked. The third member is in a wheel chair and cannot walk, but performs beautifully through his upper body strength and flexibility. During the show he came out with a mini excavator and spins it around while the other two are trying to balance on it. As in the past show, they have a nice surprise that gives the audience a jolt of adrenaline.   To get an idea you can go to https://www.inextremiste.com/spectacles/extension/

The second place went to the Akoreacro show, which had about ten very muscular men throwing around a couple as they acted out the mundane tasks of life. The acrobatics were just fantastic, and we loved that the story was so relatable.

Now that the tents are being taken down and the park is back to the quiet walkers and there is no music or food stands and people, it is a bit sad. They do a great job each year of replanting the grass where the tents once stood and within a week its like they had never been here at all.

Tonight on our way to dinner through the park we walked by the workers packing and we talked about which show we missed and how we looked forward to seeing them come back. But then in the distance I couldn’t believe my eyes! At the far end of our park another show was being set up with the big circus tent! 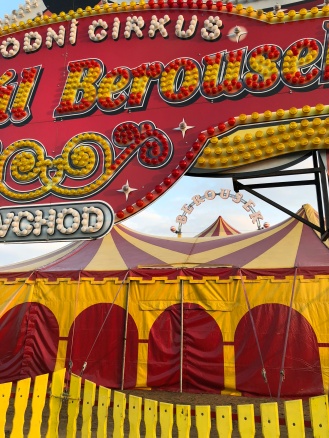 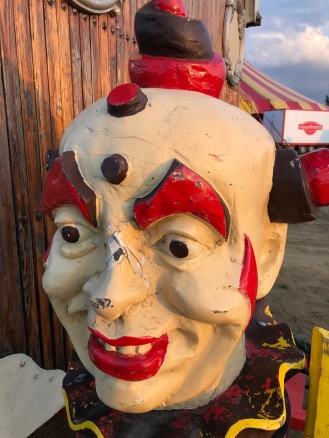